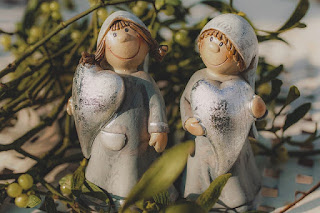 Image by 165106 from Pixabay
Christmas
Bite Me for Christmas 🔥🔥🔥🔥
Author: Megan Slayer
Genre: Holiday Romance, Paranormal Romance, Steamy Romance
Post Link: https://ornerybookemporium.blogspot.com/2021/11/bite-me-for-christmas-book-blast.html
Buy Link: https://amzn.to/31DtnSo
Blurb
He came to her in a dream, but he’s more like a nightmare in tight jeans, and she wants a taste.
Rachael isn’t good at magic, and she’s not versed in life, but this witch wants to lay her hands on the sexy vampire who’s come to her in her dreams. Can she have her Christmas wish -- the vampire?
Gavin wants the witch, but he doesn’t believe he’s worthy of her. Part of him wants to devour her magic and save himself, but what if being saved doesn’t involve dying?
Anything is possible with a little Christmas magic.
Cherry Pie and Mistletoe🔥🔥🔥🔥🔥
Author: Lisabet Sarai
Genre: Erotica, Holiday Romance, Mature Romance
Post Link: https://lisabetsarai.blogspot.com/2021/11/what-was-it-about-this-guy.html
Buy Link: https://amzn.to/3oIMDFL
Blurb
Some Christmas traditions improve with age.
At ten thirty on a stormy Christmas Eve, I really didn’t expect any business, but the sign for our diner out on the highway reads “open until midnight”, and I’m a woman of my word. Good thing I didn’t close; the half-frozen long haul trucker who wandered in really needed some hot coffee, not to mention a slice of my luscious cherry pie.
Something about the grizzled, bear-like man with the chocolate-brown eyes and ready laugh spun me back to my scandalous, sensual younger days. I hadn’t wanted anyone in years, but I wanted Dave Driver. Was I brave enough to act on my desire? And would he flee, screaming, from the amorous attentions of a white-haired little old lady?
Christmas Notes
Author: Daryl Devore
Genre: Holiday Romance, Sweet Romance
Post Link: https://daryldevore.blogspot.com/2021/11/so-again-i-say-hitting-rock-bottom-is.html
Buy Link: https://amzn.to/3cvF53t
Blurb
Can a slice of pizza and a flute erase the ravages of life and allow Giselle and Ethan to fall in love by Christmas?
Collapsing in front the biggest department store in the city on one of the busiest days of the holiday season was not how Giselle imagined her day. Cold and hungry, she trudged through her daily existence wondering if she'd ever find happiness again.
Teenagers. Ethan loved working with them and turning their raw musical talent into something beautiful and rewarding, but that didn't fill the black void in his soul.
Like fate, the songwriters' muse nudged Giselle and Ethan together. But can Giselle overcome her fears and can Ethan get past the darkness that surrounds him, so they can find love?

Mistletoe kisses, Yuletide passion and a sprinkling of kink

Kick off the festive season with this red-hot celebration of holiday love. An aging author of kinky romance surrenders to the charm of her rock star neighbor. A selfish, cynical stock broker finds himself rescued by a spunky homeless girl. On her Dom husband’s orders, a devoted submissive provides Christmas service to his best friend. A gay grad student moonlighting at a sex shop discovers it’s definitely worthwhile to stay open on Christmas Eve.

Let Lisabet warm you up with a generous portion of comfort, joy and sensual pleasure.