When her lover dumps her, just before a long-planned trip to Angkor Wat, Doa stubbornly decides to travel alone. The marvelous sights of the ancient Khmer empire do little to heal the rift in her heart. Che, the mercurial young tour guide, senses her loneliness. But how can two people from such different worlds share a future?

Jason Chow is a brilliant engineer, a successful businessman and a bit of a rebel. He’s attracted to Ploy from the moment he sets eyes on her, but he doesn’t dare respond to her advances, for fear she’ll discover his secret vice. Ploy figures she’ll have to content herself with the cold comfort of a signed contract—unless the strength of Jason’s desire overwhelms his shame.

The woman in the window seat to my right had more flesh than I’d usually find attractive, and most of it was on display. But she wasn’t trying to tease. She was simply at home in her own skin. And me? Traveling outside of the U.S. for the first time in my life, I was nervous, inexperienced, awkward and excited. Especially excited. With Helen next to me, who wouldn’t be?

Travel brings out a strange recklessness in my wife, a hunger for extremes that I don’t see when we’re in New York. Now, she wants us to seduce the achingly beautiful Buddhist monk we’ve met in Luang Prabang. I try to reject her suggestions, to resist temptation. But I yearn for his body—and his serenity.

I booked the dragon boat cruise on Ha Long Bay figuring my disability wouldn’t be a problem on the luxurious junk. I wasn’t looking for companionship, just a bit of peace. But when Stan and Phil welcomed me into their circle of love, I discovered how much healing I still needed.

When Lek stepped onto the stage at the Butterfly Bar and began to dance, I fell for her hard. The weekend we spent together in Bangkok was pure heaven. How could I know our love would drag me through hell?

I didn’t have much difficulty getting into the dinghy—just handed my cane to the guide, sat on the pier, and eased myself down to sit with the rest of the tourists. Boarding the wooden junk anchored out in deeper water was another story. A ladder of planks and rope led from the open rowboat to the deck above. To climb, I would have to put all my weight on my bad leg. I knew that wouldn’t work.

I balanced precariously in the dinghy, surveying the situation. Maybe this was a bad idea after all.

“Up you come, love.” The speaker leaned over the rail of the junk, offering a ham-sized paw. “Give us your hand.” He had a ruddy complexion and a curly russet mop threaded with gray.

“Are you sure? I’m not exactly light.” I’d never been petite, and since the accident, I’d put on quite a few pounds.

“No problem,” said his younger, sandy-haired companion. “We’re used to tossing hay bales.” He shot me a friendly grin and extended his arm in parallel with his friend’s. “Just hold on tight. That’s the way.”

I gripped their wrists. They did the same to me. As they began to haul me upward, the dinghy captain clamped me around the waist and lifted me off my feet.  My good leg flailed, trying for a foothold on the rungs of the ladder. It was all very awkward and embarrassing, but in a few moments I was standing safe on the deck.

The guide passed me my cane, then scrambled up the ladder like a monkey.

“You alright?” The burly older man shot a wry look at the tangled rope contraption the guide was pulling over the gunwale. “Not exactly accessible, that.”

“Thanks for your help.” My long shirt had bunched up below my breasts. I smoothed it down over my leggings, feeling flustered and sweaty. “Probably I should have thought about that before I booked the cruise.”

“C’mon! And miss this?” My other rescuer made a sweeping gesture, indicating the lavishly appointed ship. “All this carved teak and polished brass?” The crimson sails over our heads snapped in the wind as the junk began to move. “Ha Long Bay’s supposed to be one of the wonders of the world. We’ve been saving to take this trip for three years.”

His enthusiasm made me feel so old. “I’m in Hanoi on business. One of my meetings got canceled, so I had a few free days. My hotel suggested this would be a good way to spend them.”

“You’ve got to take your chances as they come.” The stocky fellow smiled down at me and took my elbow in a gentlemanly fashion. “Why don’t we go up front, so we can see where we’re headed? I’m Stanley, by the way. Stan, folks call me. And this is Phil.”

I nodded, warmed by their friendliness despite my sour mood. “A pleasure. Lydia Sutton. You’re from England, I gather?”

Phil gave an energetic nod. “Dorset. Stan and me run a dairy farm now. Before, though, I worked as an insurance clerk in London. Before we met.”

He flashed a look of pure adoration at his companion.

Oh. I hadn’t pegged them as gay.

Stan saw the light dawn in my face. “We’re on our honeymoon. We always dreamed of traveling in Asia.” He paused, peering at me with a puzzled expression. “You look so familiar. Lydia, you say? Any chance we’ve met? Ever spend any time in London? Or done a Brighton weekend?”

I fought my sudden panic. No one was about to recognize me. I’d changed too much. 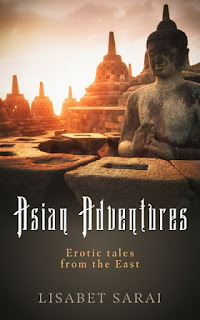 You’ll find information and excerpts from all Lisabet’s books on her website (http://www.lisabetsarai.com/books.html), along with more than fifty free stories and lots more. At her blog Beyond Romance (http://lisabetsarai.blogspot.com), she shares her philosophy and her news and hosts lots of other great authors. She’s also on Goodreads and finally, on Twitter.  Sign up for her VIP email list here:  https://btn.ymlp.com/xgjjhmhugmgh