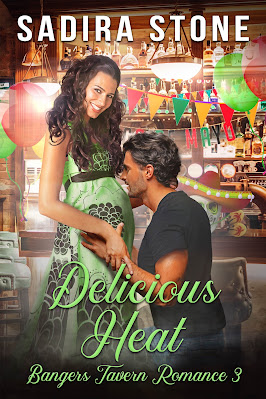 Delicious Heat: Bangers Tavern Romance 3
ISBN: 978-1-7357856-5-3 ebook
ASIN: ‎ B09HRJW5CN
Genre: Contemporary Romance, Steamy Romance
Cupid has lousy timing.
After kicking her cheating husband to the curb, nurse Anna Khoury discovers she’s pregnant. When Bangers Tavern’s hunky chef makes heart eyes at her, she dismisses that delicious thrill as the last thing she needs. Single motherhood will take all her strength and focus. Anna’s battered heart can’t take another blow.
Chef Diego Vargas is aiming higher than burgers and tater tots. His dream—his own food truck, the Empanada Angel, but he’ll need his family’s support to pull it off. Meeting Anna leaves him thunderstruck, even though his attraction to her threatens all his plans. Call it fate, call him crazy, but he’s determined to prove he’s in it for keeps.
With a belligerent ex-husband and two overprotective families set on breaking them up, Anna and Diego will need more than red-hot passion to pull them through. His career and her baby’s future are on the line.
Come back to Bangers Tavern for a spicy tale of forbidden love that will warm your heart…and other parts…and make you hungry for empanadas!
Pre-order links:
Order your copy of Delicious Heat today!
https://books2read.com/deliciousheat
Excerpt
When the tots were crispy and golden, Diego layered on the toppings: shredded extra-sharp Tillamook cheddar, crumbled pepper bacon, paper-thin slices of green onion, sauteed garlic mushrooms, pickled sweet-hot pepper slices, sour cream, and a drizzle of his house-made spicy ketchup. Heart attack on a plate. He hoped Charlie’s sister was hungry. Was she as pretty as Charlie?
He smoothed his apron and blotted his sweaty forehead. “I’m just gonna deliver these.”
At the bar, he found bartenders Kiara and River, along with all three servers, huddled around a brunette knockout in a curve-skimming red dress.
She glanced up. Their gazes met and held. Everything else slowed down.
Those last few steps to the bar felt like being towed through honey. Her espresso-dark eyes widened, sparkling under the Christmas lights. Her plump lips parted. Her chest rose and fell.
She’s a goddess.
He set the container of tots before her, removed his cap, and scrubbed a hand through his squashed hair. She echoed the gesture, winding a chestnut curl around her slender fingers.
Abuelita had told him the story of when she and Abuelo first met. “It was like a golden rope wrapped around my heart and pulled me to him. It holds us together still.”
At the time, he’d laughed off her hyperbole. But now, in this electric moment, Diego understood exactly what she meant.
“Hi.” The angel murmured, her voice low and musical, like a cello. “Did you make these?”
Dumbstruck by her beauty, he could only nod.
She lifted a tot to her lips, inhaled the steam rolling off it, and sighed.
He thanked the kitchen gods for the apron hiding his erection.
She took a bite, then her head lolled back on a groan. “Soooo good.”
Charlie narrowed her eyes and moved closer to her sister, bristling with protective vibes. He’d do the same if someone was eyeing his little sister like a tasty snack.
Say something, idiot! He cleared his throat. “They go really well with the Port Angeles Amber.” He hooked a thumb over his shoulder toward the beer taps.
Her gaze dropped, and the corner of her mouth hitched up in a shy half-smile. “Wish I could try it, but I’m pregnant.”
No ring on her left hand, but a pale indentation where one had recently been. Divorced? Please let her be single. Please, please, please.
“Oh. Well then, enjoy, Miss…”
“Anna.” Though it didn’t seem possible, her wide smile made her even more beautiful.
Flushed and breathless, he backed toward the kitchen and bonked into something soft.
“Watch where you’re going, Romeo.” With a chuckle, Dawn grasped his shoulders, spun him around, and sent him on his way with a gentle shove.
What are you doing? his common sense shrieked. She’s pregnant! But he allowed himself a final glance over his shoulder. She popped another tot into her lush mouth and winked. He waggled his fingers and pushed through the swinging doors, then collapsed against the wall, clutching his heart.
“Whatsa matter with you?” Shelby asked with a snort.
He closed his eyes and heaved a happy sigh. “I just met the woman I’m going to marry.” 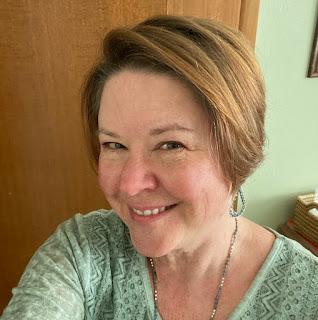 About the Author
Award-winning contemporary romance author Sadira Stone spins steamy, smoochy tales set in small businesses—a quirky bookstore, a neighborhood bar, a vintage boutique... Her stories highlight found family, friendship, and the sizzling chemistry that pulls unlikely partners together. When she emerges from her writing cave in Las Vegas, Nevada (which she seldom does), she can be found in belly dance class, or strumming her ukulele, perhaps exploring the West with her charming husband, or cooking up a storm, and always gobbling all the romance books. For a guaranteed HEA (and no cliffhangers!) visit Sadira at www.sadirastone.com.

Visit Sadira on All the Socials!