She wants to build sex toys... if they'll let her. 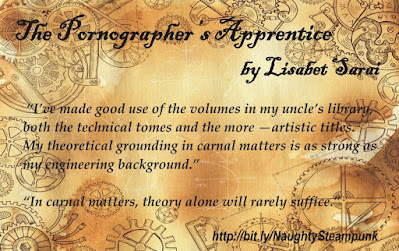 Inspired by a salacious catalogue found in her deceased uncle’s library, she applies for an apprenticeship with the Toymakers Guild. The Guild fabricates bespoke sexual artifacts for the private pleasure of select clients – an occupation for which Gillian, with her technical abilities and her lascivious temperament, is eminently suited.

When an unscrupulous nobleman sets up a competing enterprise, he threatens not only the livelihood of the Guild’s members but their lives as well. Gillian hatches an audacious plan to entrap the villain, save the Guild, and leave the absent Master no choice but to grant her heart’s desire.

If you like steam punk erotica with a kinky feminist bent, you'll love The Pornographer's Apprentice. 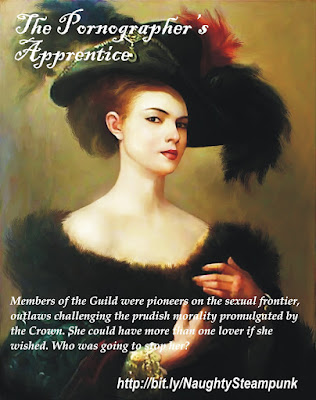 Gillian stepped into a vast space, two storeys high, luxuriously panelled in dark wood. Excitement made her heart race. The place was like something from a dream.

Overhead, a dome of leaded glass bathed the room in daylight. At the second storey level, a semi-circular gallery followed the curving walls, reachable from a stair to her left. Arrayed on the wall to her right was a dazzling collection of pliers, metal snips, tweezers, wrenches, hammers, drills, clamps, vices, springs, glass tubes, rubber piping, brass flanges, hydraulic cylinders, coils of wire, switches and dials, gauges and meters—every sort of tool and part she’d ever encountered as well as many that were unfamiliar.

On the far wall hung parts of another sort: hands, fingers, feet, splayed thighs, open mouths, as well as phalluses of varied proportions. She could not determine the materials from across the room, though some of the models looked startlingly life-like. Her diligent studies of the catalogue suggested some might be fashioned of leather, others from India rubber.

Several large workbenches filled the centre of the room, each cabled with its own electric lighting fixture dangling from a rack above. Ian and Archie huddled together at the closest table, peering through a magnifier at a mess of wiring.

Archie looked up, startled. “What? You accepted a girl?”

“Provisionally.” Amelia frowned at the florid young man. “Subject to the Master’s final approval. Meanwhile, I expect you to welcome her, introduce her to our procedures and processes, and put her to work.”

“I’ll put her to work, for sure,” Ian muttered.

The director stepped closer to the contraption on the bench. “Is this the circuitry for the Marlborough device?”

“And do you have it functioning yet?”

“Almost,” Archie volunteered. “Just one more small problem to fix, and we’ll be ready to test.”

“Indeed.” She scrutinised the web of copper strands for several minutes, then turned to Gillian. “Perhaps you can assist them, Miss Smith. They appear to be somewhat out of their depth.”

Apparently feeling that this was sufficient instruction, Mrs. Featherstone headed for the door, but she paused exiting. “I shall see you all at dinner. And I shall expect a full report on your progress. Do you understand?”

“Of course, Mrs. Featherstone,” the young men chimed in unison.

Ian and Archie wore glum expressions in the wake of Amelia’s departure.

“So what’s the problem?” Gillian asked.

“To some extent. My father taught me the basics.”

“Or else the motor itself is defective,” countered Archie.

“Impossible. I’ve built a dozen motors with this design.”

“I have some experience with both types of work, though my speciality is mathematics and logic.” She stepped closer to the circular magnifier.  “Might I take a look?”

Under the lens, every detail of the circuitry became clear. In fact, the design was quite elegant, the layout logical and precise. She scanned the interwoven wires, focusing on their connections. In thirty seconds, she had located the fault.

“There,” she said. “Between pins fourteen and fifteen. The solder is not adhering.” Backing away, she let Archie look.

“May I try fixing it? Just for practice?”  She added a bit of softness to her voice, a tentative quality that did not reflect her true nature. The last thing she wanted was to intimidate the other apprentices.

“Why not?” said Archie gallantly. “If you have trouble, I can take over.” 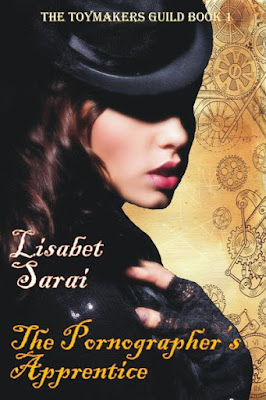 I've always felt an affinity for the Victorian period. I was wearing high-necked blouses with cameos, long flowing skirts, and lace-up boots in my teens, long before they were fashionable. (The corsets came later...!) With my long hair parted in the middle and pulled back into a bun, I could well have been one of the heroines in the books I loved so much.

I was also a science geek from my earliest days. I received my first microscope when I was five, and my first chemistry set at seven. I entered every science fair. In seventh grade, I won grand prize on a televised science quiz show.

So it’s hardly surprising I’ve become a devotee of steam punk. I've been in love with this strange meld of science fiction and Victoriana for as long as I can remember – long before steam punk even had a name.  When I was in high school, I devoured H.G. Wells and H. Rider Haggard, and shared a Sherlock Holmes obsession with my dad. Later, I marveled at Neal Stephenson's The Diamond Age and more recently, I discovered Gordon Dahlquist's incredible The Glass Books of the Dream Eaters.

I've written a number of steam punk short stories for anthologies, as well as a full length novel, Rajasthani Moon. All these tales, though, were set in Asia rather than in the British Isles. I think I was afraid I’d make errors my UK readers would notice if I tried setting a story in Queen Victoria’s home country. In my latest steam punk release, The Pornographer’s Apprentice, I finally bit the bullet and wrote an English steam punk novel. I had a lot of help with details from my critique group at the Erotica Readers & Writers Association, but of course I take responsibility for any residual mistakes.

I just hope you’ll find the story so exciting, you won’t notice them! 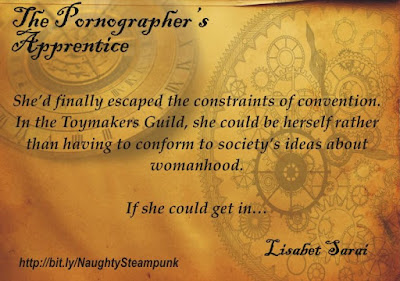 Defying the repressive morality of the Victorian era, the Toymakers Guild uses advanced technology to fabricate bespoke sexual artifacts for the discrete pleasure of select clients. Its members are not only brilliant engineers but also sexual renegades seeking freedom from the prudish society that surrounds them. These are their stories.