This post is part of a virtual book tour organized by Goddess Fish Promotions. Steve Zimcosky will be awarding a $25 Amazon or B/N GC to a randomly drawn winner via rafflecopter during the tour. Click on the tour banner to see the other stops on the tour. 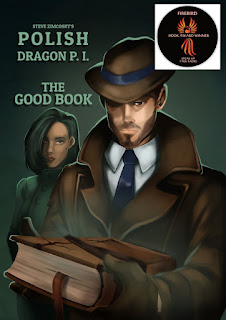 A bible mysteriously disappears from a Russian businessman’s home and it is said to have a secret hidden inside that would cause embarrassment to the Russian Orthodox Church. The Polish Dragon P. I. is called in, along with his new partner, to help find the bible. The problem is the bible is not supposed to exist and there is a secret organization, sworn to protect the church, also looking for the bible. They will stop at nothing to locate it and destroy it.

"So," Andy began, with his voice trembling a bit. "The item that was stolen was an old family bible. It had been in the family for well over 600 years."

"Wait a minute Andy. You said that the police could not be involved. I don't understand, aren't they capable of finding an old bible

"I'm sure they are," he responded. "The problem is that the book is not supposed to exist. It was supposed to have been destroyed 200 years ago."

"Apparently the leaders of the Orthodox Churches in Eastern Europe demanded it. There was supposed to be some sort of hidden message that would be devastating to the Church, even though my family never knew that the message existed. Plus it also had my family genealogy going all the way back to the 15th century."

"So, why was it never destroyed?"

"It had been in the family for many years and rather than destroy it, one of my ancestors decided to smuggle it out of Russia. They burned a fake one in its place and apparently, that appeased the Church. If they only knew it wasn't the real one. They would probably come after my family again."

About the Author: Steve Zimcosky is a multi-award winning and international selling author. He is the creator of the Polish Dragon P. I. series and was born in the Slavic Village area of Cleveland, Ohio where many of his stories take place. He has wanted to be an author since elementary school while reading books like White Fang and Call of the Wild by Jack London. He spends his retirement time writing short stories on a variety of subjects he hopes his readers will enjoy. Some of his favorite authors include Stephen King, James Clavell, Thomas B. Dewey and Vivien Chien.

a Rafflecopter giveaway
Posted by Ornery Owl of Naughty Netherworld Press and Readers Roost at 12:00 AM