A Room in Blake’s Folly (published by The Wild Rose Press)
If only the walls could speak…
In one hundred and fifty years, Blake's Folly, a silver boomtown notorious for its brothels, scarlet ladies, silver barons, speakeasies, and divorce ranches, has become a semi-ghost town. Although the old Mizpah Saloon is still in business, its upper floor is sheathed in dust. But in a room at a long corridor's end, an adventurer, a beautiful dance girl, and a rejected wife were once caught in a love triangle, and their secret has touched three generations.
I love writing about people who are different. Some are forced to adapt to new circumstances in order to survive, others are originals, folks who have never really fit into mainstream society. But no one is humdrum, and all have dreams.
So what do an embittered mail-order bride, an adventurer, a brothel madam, a silver baron/artist, a war refugee, a pacifist, a playboy veterinarian, and a woman who protects spiders all have in common? They get another chance to find love. And what better setting for romance than a semi-ghost town in Nevada?
A Room in Blake’s Folly begins in 1889 with the romance between Sookie Lacey, former prostitute now saloon dance girl, and Westley Cranston, adventurer. But love rarely follows a straight path. Times change, life goes on, and new relationships form. In 2022, Blake’s Folly, once notorious for saloons, brothels, speakeasies, and divorce ranches, has become a semi-ghost town of abandoned shacks and weedy dirt roads. But the old stories are still very present, and they have the power to influence the remaining 53 inhabitants.
Excerpt
Lance saw the woman doubled over in the dirt road, her legs bent backward and to each side of her in what looked to be an exceedingly painful position. Had she been hit by a car? Probably not: few enough cars passed this way. She might have had an attack of some sort. He loped toward her, thinking only of rescue and alleviating pain, because that’s what a veterinarian’s job is all about, and humans happen to be animals, too.
He was less than ten feet away, when she raised her head and glared at him with fury. The look, as toxic as a poison arrow, halted him in his tracks. She certainly didn’t look as though she needed his help. She didn’t look as though she’d ever need anyone’s help.
“Um…I’m sorry. I saw you down there, in the road, and I thought…”
He saw her fury seep away, transform into visible regret. “You chased it away.”
“Right.”
Swinging her bent legs into a more reasonable position, she stood up without using her hands. For someone who wasn’t young, she looked to be in perfect shape. Or at least she had maintained an admirable flexibility.
He knew who she was, all right. Who else had a long bushy ponytail of silvery hair? Who else had three dogs trailing after her—three dogs now sitting calmly in the shade of the abandoned laundry and watching him, wary-eyed. They knew he was one of the vets who gave them shots every year, and that meant he was no real friend.
The woman in front of him, what was her name? Lucy something…oh yes, Lucy Barnes, and she worked in Rose Badger’s vintage clothing shop whenever Rose roared off to Reno. For the first time, he noticed the camera.
“Look, I thought you had fallen or…”
“Yes, I realize that’s what you thought.” She didn’t look as though she were about to forgive him for it either.
“You were taking a photo?”
“Yup.”
“Of what?”
“A Xysticus.”
“A what?
“Oh, sorry. A ground crab spider.”
“Of a ground crab spider?”
She relented slightly. “They’re called crab spiders because they look and move like crabs.”
“Yes,” he said dryly. “I think I’ve worked that one out.”
“Right.”
“What for? Why were you taking a photo?”
“Because I like them. I like macro photography, I like taking photos of spiders, and this particular spider was very pretty.”
“Pretty. Got it.”
She looked annoyed again. “Veterinarians don’t consider arachnids worthy of notice?”
“Did I just tell you that?” he said a little too defensively because she was right: he never noticed them. Okay, he never killed them either, because he knew how useful they were, but that was as far as things went. “What was particularly pretty about that one? I mean spiders look like spiders to me. I never thought aesthetics came into it.”
“Really?” She even looked surprised.
“Really.” Inwardly, he sighed, regretting his attempt to maintain chatty conversation. It was always the same when you dealt with nuts, cranks, and fanatics: they couldn’t understand how normal people functioned.
“Most crab spiders are brown-beige so they can blend into their surroundings and catch prey easily. They do have splotches though, and this one had a nice leaf marking on its opisthosoma.” She smirked. “Sorry, that’s the posterior part of the body. The front part is the—”
“Prosoma,” he interrupted.
The smirk faded and, wordlessly, she stared at him.
It was his turn to be haughty. “Since you know I’m a veterinarian, you’ll probably accept that, in this century, we do go to school. And while we’re there, we manage to study a little science.”
“Sorry,” she said contritely.
“That’s all right.” He tried not to look too self-satisfied. 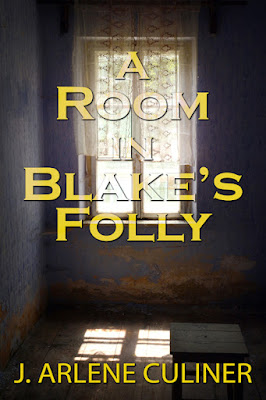 Review of A Room in Blake’s Folly

Rich detail and scintillating dialogue transport the reader through the decades between 1889 and 2022 of this surprising saga. With flowing descriptive phrases (“… the walls had a yellowish hue that only time could bring,”) Culiner effectively intertwines the characters and descendants of Blake’s Folly. And although overhunting and pollution mean environmental change, the charm of this old world community remains intact. Cheers for this book! 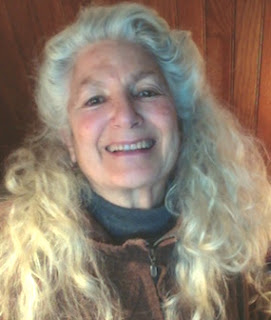 Writer, storyteller, photographer, and social critical artist, J. Arlene Culiner, was born in New York and raised in Toronto. She has crossed much of Europe on foot, has lived in a Hungarian mud house, a Bavarian castle, a Turkish cave dwelling, on a Dutch canal, and in a haunted house on the English moors. She now resides in a 400-year-old former inn in a French village of no interest and, much to local dismay, protects all creatures, especially spiders and snakes. She particularly enjoys incorporating into short stories, mysteries, narrative non-fiction, and romances, her experiences in out-of-the-way communities, and her conversations with strange characters.