This post is part of a virtual book tour organized by Goddess Fish Promotions. Five winners will receive a digital copy of the book. Click on the tour banner to see the other stops on the tour. 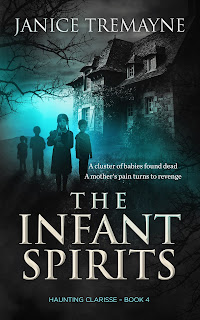 When a poltergeist takes root in a hospital, can a determined ghost chaser undo a devilish long-lasting curse?

Clarisse Garcia has always fought evil. A driven spirit hunter, she demolishes demonic threats before they can corrupt the innocent. But even this hardened woman is stunned when she enters an eerie Tasmanian maternity ward filled with the anguished cries of babies’ souls.

Undeterred, Clarisse dives headfirst into helping release the spirits bound to a sinister demon. But when the foul entity targets the unborn life in her womb, she faces her toughest battle yet to save her offspring’s future.

Can this spiritual warrior protect her child and free the tormented young ghosts?

The Infant Spirits is the fourth standalone book in the blood-curdling Haunting Clarisse supernatural horror series. If you like chilling apparitions, wicked demons, and a mother fighting for her child’s very existence, then you’ll love Janice Tremayne’s bedtime nightmare.

“You’re dirty rotten, Delaney, you witch.” Abbey kicked as hard as she could, but Delaney felt capable of handling her outbursts. She was more robust than Abbey, whose frail body was no match for the hard taskmaster with the nickname Haggus.

“Just ignore her language, Louise. She’ll calm down after the doctor gets here with the morphine. It will knock her out, I hope.”

“You’re a demon, Delaney. Fess up and stop hiding behind that nurse’s uniform, as if you’re the moral light of this cursed place!” Abbey lifted her head and spat toward the nurse, narrowly missing her face with the thick, yellowish mucus that stuck onto her white uniform.

Louise placed her hand over her mouth and nearly chucked. She was an inexperienced nurse, used to the private hospitals in Hobart for dignitaries and the rich. However, she’d had no option but to work at Willow Court Asylum, following her husband’s posting to nearby military barracks.

Abbey continued her rage, holding on to the belly with both hands and pressing slightly in a futile attempt to stop the pain that was ripping through her body. She was eight months pregnant and was giving birth to a pre-mature, illegitimate child. No one knew who the father was, and nobody cared. That was the way it was back then, with a woman caught destitute in an asylum and locked away from the rest of civilization. They turned a blind eye to sexual assaults by staff that were commonplace amongst the patients.

About the Author: Janice Tremayne is an Amazon bestselling and award-winning ghost and supernatural writer. Janice is a finalist in the Readers' Favorite 2020 International Book Awards in fiction-supernatural and was awarded the distinguished favorite prize for paranormal horror at the New York City Big Book Awards 2020.

She is an emerging Australian author who lives with her family in Melbourne. Her recent publications, Haunting in Hartley and Bolder Blindsided, reached number one in the Amazon kindle ranking for Occult Supernatural, Ghosts and Haunted Houses categories hot new releases and bestseller. Janice is well-versed in her cultural superstitions and how they influence daily life and customs. She has developed a passion and style for writing ghost and supernatural novels for new adult readers.